I’m a recent member of the Van Rockman fan club. I must admit before listening to them I thought: ‘Oh here we go! Another bunch of old gits past their prime trying too hard.’ A harsh judgement to be sure. Short sighted? Absolutely. Whatever prejudices I had were quickly swept aside once I listened to their songs. For a bunch of old gits, they’ve got some bangers under their belt!

Having recently uploaded 5 of their best songs (and that’s a tough choice) the lads have seen a rise in their online presence. It’s not hard to see why. For those that expect a rip off of old 70’s metal and heavy rock, prepare to be disappointed. It’s beyond that. Every song rocks with it’s own unique flavour.

Whilst I could listen to songs like the epic ‘Harley To The Party’ or the infinitely bluesy ‘Rock Me Crazy’ all day, it’s ‘Autumn Fields’ that sticks in my mind.

It’s one hundred years since the Battle Of Passchendaele began. It marked some of the bloodiest months of the first world war. British casualties alone are estimated at 240,000. A true number can’t be given because of the sheer scale of the horror. After three months, one week and three days, the allied forces had only advanced five miles.

To commemorate their sacrifice Van Rockman recorded the song ‘Autumn Fields’. It’s a departure from their usual rock and blues formula. Here you have a thoughtful and respectful song. The sombre tone and beautiful lyrics work beautifully to pay tribute to our fallen heroes. They’ve even made sure that all proceeds will go to Help For Heroes and the Poppy Appeal.

If there is one thing you do today, go and buy ‘Autumn Fields’. It’s available on iTunes and Amazon. 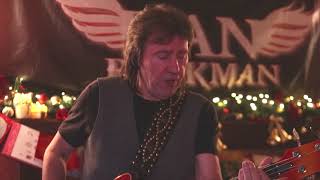